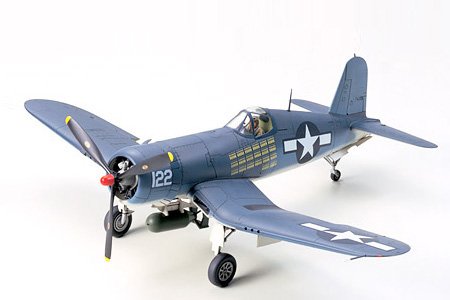 With its 2,000hp engine and distinctive inverted gull wings, the F4U Corsair was an excellent fighter which served on the frontlines from WWII to the Korean War. This kit depicts the F4U-1A variant which first entered service in the summer of 1943 and was the mount of many famous U.S. Navy and Marine Corps aces. Characteristic features such as the taller seat, longer tailwheel, and improved canopy have all been accurately reproduced, and the wings may even be assembled in folded position. Parts for 1,000lb bombs, drop tanks, and two pilot figures, as well as two marking options are included.